The Best Time to Take Your Midwinter Ski Trip
From the Colorado slopes to après-ski in the Alps, discover tips and insights from Expedia's Snow Boots Report

BELLEVUE, Wash., Jan. 24, 2018 /PRNewswire/ -- While snow in our cities can be a bit disruptive, snow on the mountains is, for many, cause for celebration. As a tribute and resource for these snow enthusiasts, Expedia.com® today released the results of the first annual Snow Boots Report1, a global study among adults aged 18+ across 13 countries who go on skiing and snowboarding vacations. The study explores all aspects of snow-oriented trips, revealing the winner of the age-old snowboarding vs. skiing battle and the most popular après-ski activities. Expedia also looked at average hotel rates in some of the most iconic ski destinations in the U.S. and abroad to determine the best time to go to lock in the cheapest rates. Don't wait too long – for most of the world, the best deals (and best snow) will only last until March. 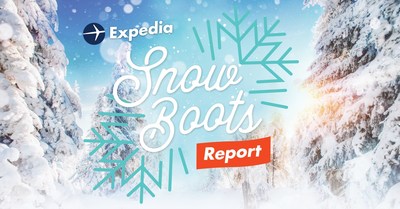 "Ski vacations are some of my favorite trips to take with family and friends, but they can sometimes be costly once you add everything up," says Nisreene Atassi, global head of communications for Expedia.com. "There are plenty of ways to save on your next trip to the mountains – booking everything together is probably the best kept secret in travel when it comes to cutting costs and it makes managing your trip that much easier. Bundling your flight and lodging can save you on average of up to $600, and you can also add in your lift tickets and car rental for even more savings."

Switzerland Takes the Cake for Dreamy Ski Conditions and Next-Level Skiers
According to the Snow Boots Report, when it comes to deciding where to go on a snow vacation, the total cost of the vacation and snow quality are the top considerations for American survey respondents. A solid reputation for great skiing and snowboarding (37 percent) and safety (37 percent) are tied for third. With its soaring peaks and top-rated ski resorts, Switzerland (32 percent) unsurprisingly emerged as the global favorite for having the best skiing and snowboarding conditions, with Americans also deeming Swiss skiers as the most skilled in the world. Closer to home, Canada was the runner up in terms of amazing winter sports conditions and talented skiers, according to U.S. respondents.

When and Where to Hit the Slopes this Winter
As winter sports enthusiasts and beginners alike hit the slopes this season, Expedia plowed through travel data2 to determine the optimal month to save on hotel bookings in and around some of the world's most coveted snow destinations. From Colorado to the iconic Swiss Alps, to some lesser-known ski resorts in New Zealand and South Africa – travelers have plenty of options to consider for their midwinter escape.

Americans are Spending Their Long Weekends on the Slopes
The biggest factors attracting Americans to snow vacations are their love of snow and mountains (68 percent) and the opportunity to bond with friends and family (51 percent). As it turns out, Americans are the most regular snow vacationers compared to other countries. Almost a quarter make more than two trips per year while roughly the same number of UK respondents reported going every two or three years. Collectively, 40 percent of travelers spend up to eight days on a snow vacation. The typical length for Americans is three to five days (56 percent), making it a popular option for a long weekend getaway in local ski hubs like Colorado and Utah.

The Ultimate Battle: Skiing vs Snowboarding
Strong opinions abound regarding which snow sport requires the most technical skill, offers the biggest rush and looks the coolest. So, which one of these sports is the best? The results show that preference is affected by age and location:

While the main purpose of venturing to the mountains is typically to ski or snowboard, over 20 percent of American respondents would consider going on a snow vacation with no intention to take on these winter sports. Americans interested in alternative activities said the biggest temptations would be snowmobiling and ice-skating (53 percent) followed by snow-sledding (51 percent), and ice hockey would tempt 27 percent of Canadians.

Après-Ski
The après-ski experience is arguably just as essential to a skiing and snowboarding vacation as snow itself. In fact, most Italians deem this more important than ensuring the resort has a great reputation for winter sports. Globally, the top après-ski experiences are being in front of a romantic fire with your significant other (33 percent), drinks with your crew at the bar (22 percent), and taking a dip in the jacuzzi (15 percent). If a private fireplace and jacuzzi are high priorities, travelers should consider vacation rentals – a great option for groups traveling together or couples looking for the perfect après-ski setting. Expedia.com offers all-kinds of places to stay around the world; travelers who rent vacation homes often get twice the space for half the cost of a hotel.

© 2018 Expedia, Inc. All rights reserved. Expedia and the Airplane logo are either registered trademarks or trademarks of Expedia, Inc. in the U.S. and/or other countries. All other trademarks are the property of their respective owners. CST# 2029030-50. Visit our web site https://www.expedia.com/ or use our mobile app to book cheap flights and hotels.

1Survey Methodology
This online study was conducted on behalf of Expedia by Atomik Research among over 13,000 consumers in the UK, the USA, Austria, Belgium, Canada, France, Germany, Italy, Netherlands, Russia, Spain, Sweden and Switzerland. The sample was based on adults aged 18+ who go on skiing and snowboarding holidays. The research fielding took place between 9th September and 10th October 2017. Atomik Research is an independent creative market research agency that employs MRA-certified researchers and abides to MRA code.
2Based on average daily rates data from January 1, 2018 – March 31, 2018 on Expedia.com
3-4Based on average daily rates data from June 1, 2017-September 30, 2017 on Expedia.com